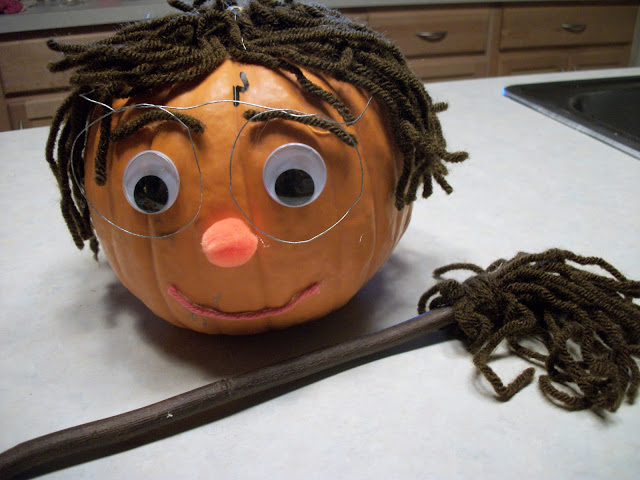 For my daughter's 2nd grade project, they were supposed to help disguise a pumpkin as their favorite character from a book so that it wouldn't get carved for Halloween.  You could do whatever you wanted, but no carving!

Emma had just finished reading Harry Potter and the Sorcerer's Stone (in only 3 days!), so she chose Harry Potter for her favorite character.  I didn't want to buy much to create the pumpkin, so I tried to use what we had on hand.  The only thing I had to buy was the brown yarn.

We began with the glasses.  We twisted some wire around a small glass to make the frames.  We bent the arms around the sides and hot glued them in place.  Once we had the glasses in place, we were able to hot glue the googly eyes, pom pom nose, yarn eyebrows, and pink yarn mouth in place.  Emma drew his lightning bolt scar on with a sharpie marker.  Then we just hot glued the brown yarn hair around his head.

To make the broom, Dad found us a stick in the yard.  I actually used the dvd and wrapped the yarn around it.  Cut the ends on one side.  Place the other side on one end of your stick.  Wrap another piece of yarn around the yarn and tie a knot to attach it onto the stick.  Wrap your yarn around your knot a few times and then tie again.

The pumpkin has been saved from carving and is ready to trick-or-treat as Harry Potter! 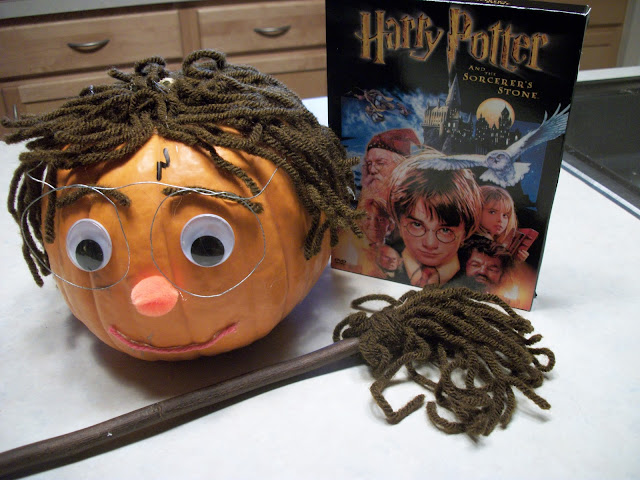 Posted by Melissa @ LoveBugLiving at 8:05 AM