I was working up until the last possible moment on gifts I was making.  I just couldn't give any of them up!  I didn't really have to make them, I just wanted to add that one extra homemade item.  This was especially true of my father-in-law's gift.

We always spend Christmas Eve at my In-laws house.  Their tradition has always been to open their gifts on this night, so our family always goes to their house to exchange gifts.  We usually spend most of the day there playing games and just hanging out.  We have our meal and then all take turns opening a gift one at a time.  This was unusual for me!  My family opens gifts on Christmas morning and we all just dig in!  It took some getting used to with this one at a time thing.  I just felt like I was on display, and opening gifts in front of people is just not my thing.  I just get nervous for some reason.  Ten years later, I'm pretty used to it.

I had requested the help of my husband, since he is the BBQ guy.  I had considered making both him and his Dad BBQ sauce and rub.  After inspecting our pantry, I decided he really didn't need any!  I reassured him we could make him some when he actually NEEDED it.  Instead he got to help make them.  I have to say that I have no idea what he did to make his rub.  He just started mixing little bottles and spices and it was done!  So for a great rub recipe and Peach BBQ sauce check out this post by Aggie's Kitchen.  For the Sweet & Smokey BBQ Sauce we made, check out this recipe.  It was super simple and quick. 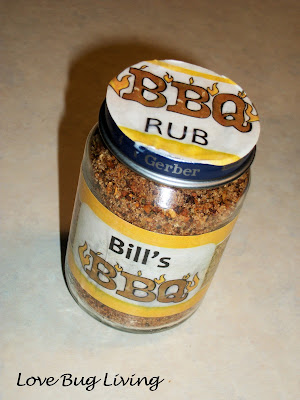 I really wanted to cusomize the bottle and jar we were giving him.  Luckily, we had just run out of Agave and the bottle was perfect to recycle for his BBQ sauce.  I have a few baby food jars, so a larger one was great for the rub.  I wish I had more time so that I could have painted the lid to cover the Gerber name.  I created the labels on MS Word, adding the BBQ clipart I had found on the internet.  I added his name so that it was more personalized too.  After printing them out, I simply used mod podge to adhere them to the bottle, jar, and lid.  A fun and personal gift for the BBQ fan!  This would be great for Father's Day as well! 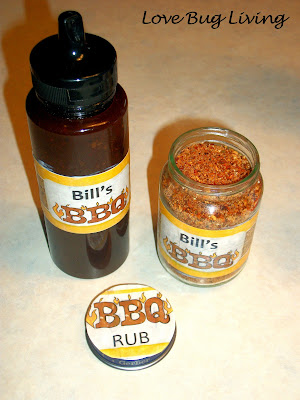