It doesn't matter what time you wake up in the morning to work out here in Florida, when you are done you will be dripping with sweat.  If the sun doesn't get you, the humidity will!  During the school year I will meet some of my teacher friends and run at 5am.  It's much nicer to meet over the summer since we get together at a much more respectable hour.  Of course it is just miserable to run during the summer here so we bike much more.  It works out nice since our YMCA allows you two hours of child care.  If you have a cell phone, they will let you run or bike outside which is so much better than the boring dreadmill!

I haven't been biking that long, but it is amazing what a little practice does for you.  When I first started riding, I would worry about every single car that passed me.  I guess it is something you get used to.  Now I definitely pay attention to the cars, but I don't stress out everytime one passes me.  However, we seem to be around a lot of uneducated drivers lately.  That's my nice word for Idiots that are trying to kill me!  For the record, cyclists are like cars.  Share the road.  If a group of cyclists is driving down the road, treat them like they are a car.  That means that if they are biking 20 mph down a road, they don't have to stop just because you want to cross the road.  You can wait 2 seconds for them to pass and then cross behind them instead of driving at them while flicking them off.  There have been a few other similar incidents, but you get the idea.

We've gotten to the point where our typical ride is about 30 miles.  Two hours of childcare is just enough to fit that in with any stops for lights that we have to make.  We made it to about 34 miles once, but I think we were a couple of minutes late getting back too.  Since we use up all of our time biking, I don't have a chance to shower before heading home.  I hate sitting on our car seats all sweaty.  I'll throw a towel on the seat, but it always slides down and I end up sitting forward so as not to get the seat back all sweaty. 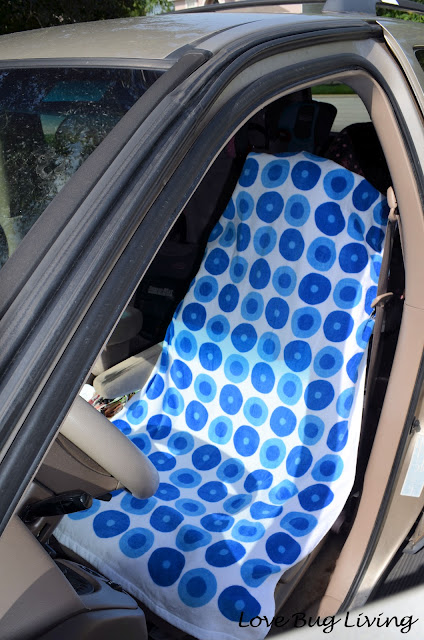 That's when I decided to make a car seat cover out of a beach towel.  Beach towels are long enough to cover the whole seat and easy to throw in the wash as well. 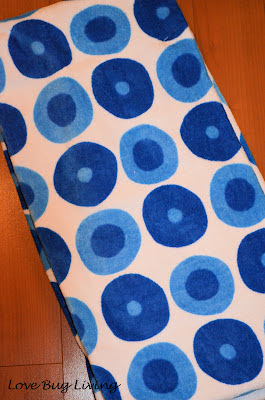 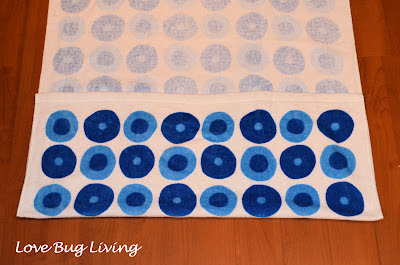 I found my beach towel on clearance at Target for $3.50.  Simply fold down the top edge about 12 inches.  Sew down the side seams of the folded section on both sides.  This will create a pocket at the top of the towel.  Now you can hook the pocket of the towel over the headrest.  No more sliding towel.  It stays in place, protecting your car seat from any sweatiness.  This would be great after a day at the beach as well.  Clean up is easy since you just throw the towel in the wash. 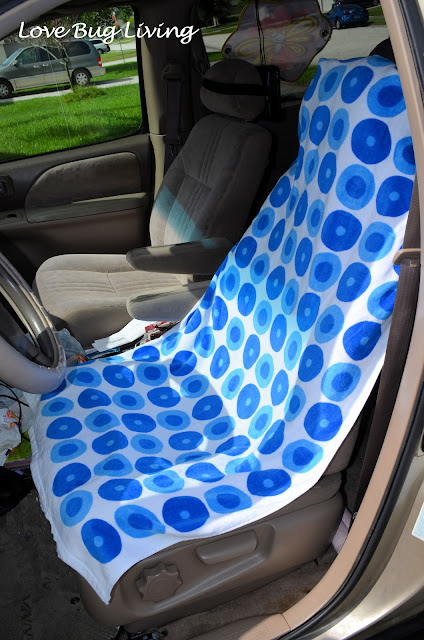 When you are not using it, your towel seat cover can be folded up and stored under your seat.  It's always close by whenever you need it.  Save yourself some trouble cleaning your seats and make yourself a Sweaty Towel Car Seat Cover!

Posted by Melissa @ LoveBugLiving at 5:29 PM