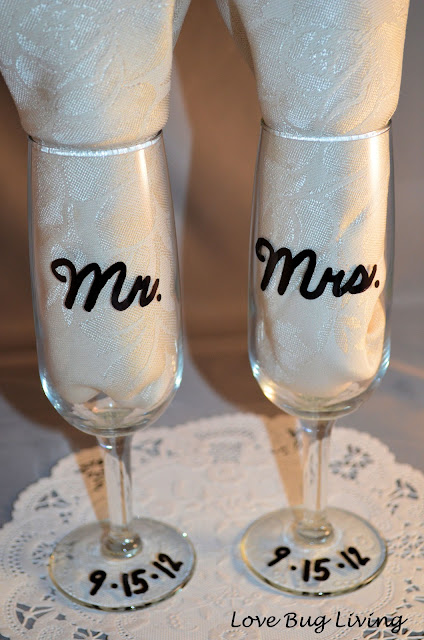 As you may know by now, I have been helping one of my friends with her wedding.  The bride had mentioned that she wished that she had ordered herself the etched wedding toasting glasses for the champagne toast at the reception.  Although I was not quite up for creating etched glasses, I had seen something on pinterest that gave me an idea.  The pin I had added was from a blog that has since been deleted, so I'm not really sure where it originated.  The idea though is that you can use a Sharpie permanent marker on dishware and then bake it to make it permanent.  I figured that the same should be true of glassware. 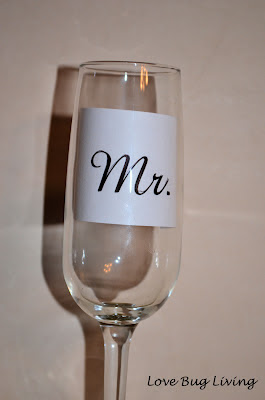 First you need to find your flutes.  I scored mine for $1 each at Dollar Tree.  I wanted to write out Mr. and Mrs. to represent their new life as husband and wife.  You could also write I Do or Love.  You could really personalize these for any occasion.  I can't say that I have the best handwriting, but don't worry I've got that covered.  Figure out the look that you are going for and pick out a font that you like on Word.  Type out the word you would like to write and increase the font size to what you want.  Print and cut it out and place the piece of paper inside your glass.  Tape it in place so it stays.  Now all you have to do is trace the font. 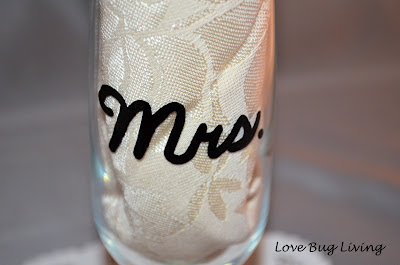 This looks much better than if I had tried to write it out by myself.  I would recommend practicing on a scrap piece of paper still though. I did feel more confident writing out the bride and groom's wedding date on the base of the stem.  You could also print and trace the date as well. 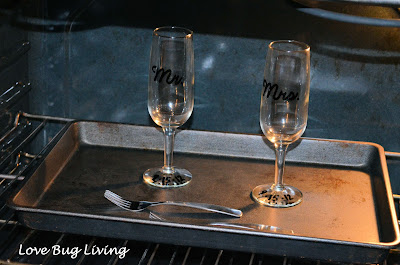 Now it's time to bake your glasses.  I placed them on a baking sheet.  Those are my I Do forks on there as well that I will tell you about soon.  You will probably have to lower your baking rack, so you might want to do that before you preheat your oven to 350 degrees.  Bake for 30 minutes.  Be sure to let them cool before handling because they will be very hot!  This should set your marker and make it permanent.  I would probably recommend still washing these by hand though. 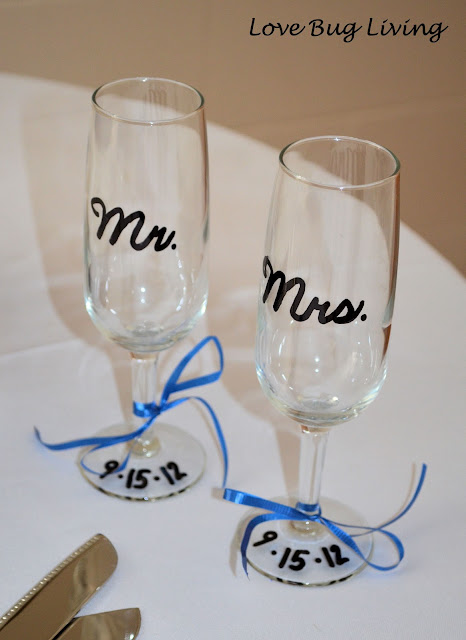 Update:  After having issues with Sharpie rubbing off after washing, I would suggest you use a Pebeo Paint pen to write with on your glassware.  Follow the baking instructions on the pen to seal it.  The sharpie technique is still a good idea for any project that does not have to be washed like a decorative plate, vase or lamp. 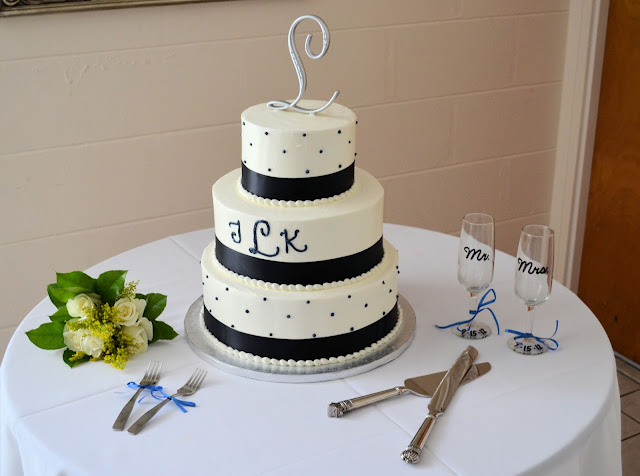 Here are my Mr. and Mrs. wedding toasting glasses on the cake table.