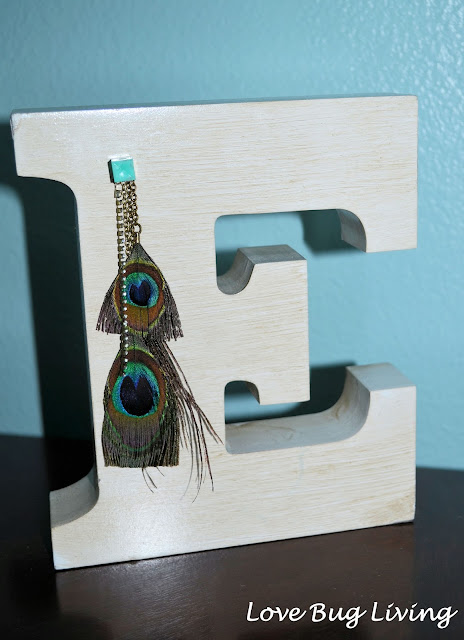 We had the best plans.  Really we did.  But you know what they say about the best laid plans.  They often go astray!  Or maybe Murphy's Law is a better description of our weekend.  If something can go wrong, it will!  We have been planning and working on redecorating our girls' rooms.  Right now the youngest has her own room, but is moving from her crib to a big girl bed.  So we are giving her room a new look.  Our other two have been sharing a room and had another room as a playroom.  Now our oldest is moving out into her own room.  We figured it would be a good idea to have them stay at Grandma and Grandpa's house for the weekend so we could get everything finished and surprise them with the completed rooms.  We will just say that it has been two weeks and the rooms are still not finished.  They are pretty much at a stand still!

It seemed like every project that we attempted had some kind of problem or set back.  The monsoon rainstorm didn't help either.  And then we found that we had water coming in through the walls of our youngest daughter's room.  The carpet and pad were soaked.  We weren't sure if we had mold issues or not.  That put all the plans for her room on hold.  She actually moved in with her sister for a few days.  We have had people out and we are good on the mold part, but we need to get gutters installed and the whole outside of the house repainted with sealing paint.  Fun, fun!  Not as easy as it sounds either since it rains every day in Florida this time of year.  At least we have a plan though. 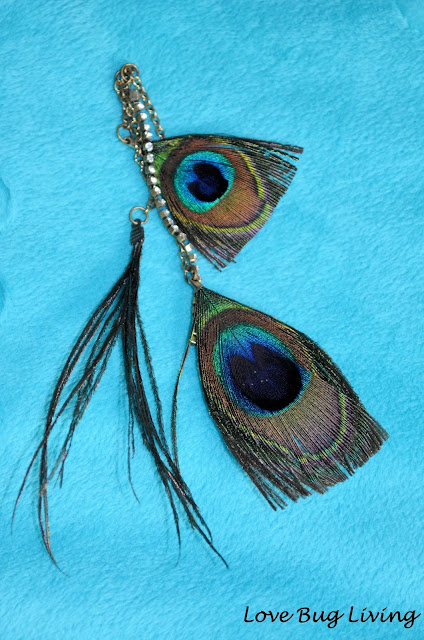 Despite all the little issues we had during the weekend, we kept plugging away at the projects we could get done.  I'll be sharing some of these projects with you (and the little setbacks as well).  Most of them are for my oldest daughter's peacock themed room.  I had hoped to share some of them already but again life happened.  Two funerals in the past week, both for a parent of friends of mine, is just too much heartache.  It's so hard to have to watch a friend deal with such a horrible situation.

Today I thought I'd share one of our easiest projects, our Peacock Feather Letter E.  My daughter's favorite colors are blue, purple, and green so she decided she wanted to make her room peacock themed.  I was thinking it would be easier to find peacock themed bedroom stuff, but not so much!    We found plenty of artwork for the walls, but other items proved harder to find.  I'm sure it will be every where as soon as we get it all together though!  I decided to add just little details to items to help them fit in with our peacock theme. 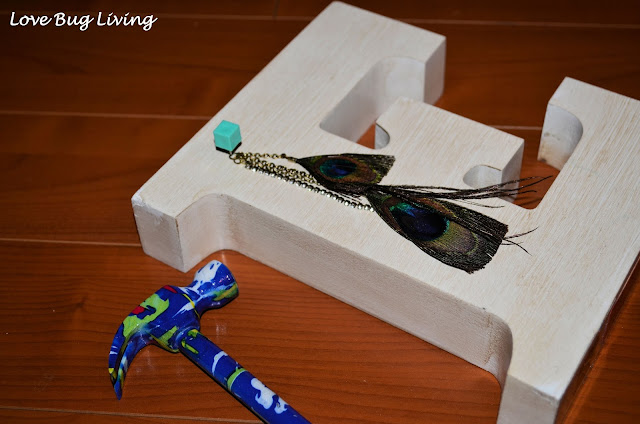 We found this letter E on clearance at Marshall's.  Perfect price at only $3.  I like adding letter monograms to add that personal identification to a room. Also, it was easy to add just a bit of peacock to make it more interesting.  I found the peacock and chain charm in the jewelry section at JoAnn's.  I liked that it would dangle on the E.  I first considered Mod Podging a single feather on to the E, which would be adorable as well.  But when I found this charm, we changed our plan.  I had this square shaped tack on hand, and it was simple to GENTLY hammer the tack into the letter, holding our peacock charm in place. 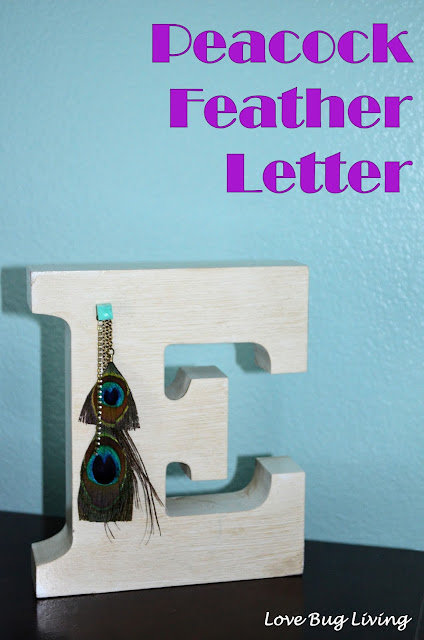 The Peacock Feather Letter now stands on one of her bookcases.  It's just a little detail, but I love how little things can really enhance it and transform the letter to fit in with our theme.

Posted by Melissa @ LoveBugLiving at 8:42 AM