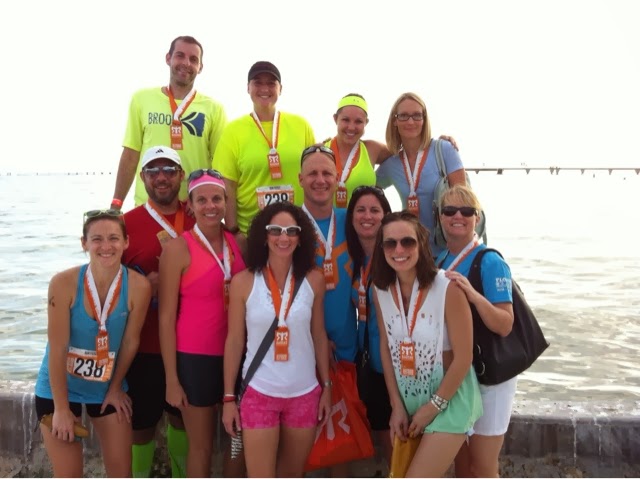 Last weekend I decided it would be fun to take a few of my friends and two vehicles and have everyone run from Miami to Key West!  Sound fun?  If  so, you should definitely check out Ragnar Relay!  It really was such a fun time and a great way to get to know your friends even better.  Sounds crazy, but with just a bit of training, all levels can join a team to run 200 miles together. 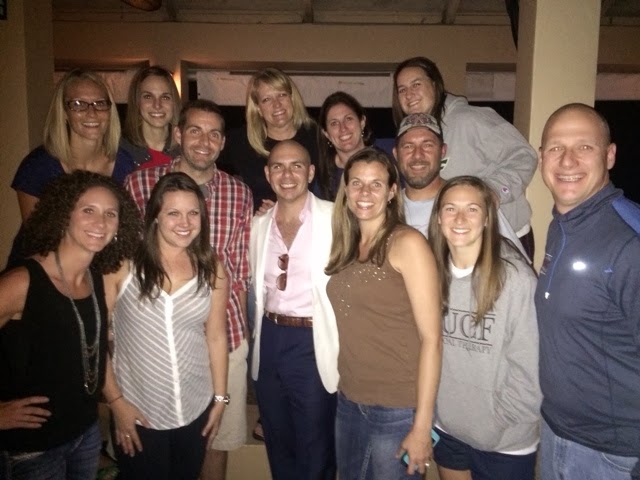 We started off the night before our race at the restaurant in our hotel, The Grove Isle Resort and Spa.  While waiting for our dinner to arrive, someone spotted Pitbull walk by on his way to the bar.  After working up the nerve, one of our teammates approached him to take a picture with us.  He introduced himself to each of us and was such a nice guy.  He wished us luck in our race and was happy to take a picture.  Great guy!! 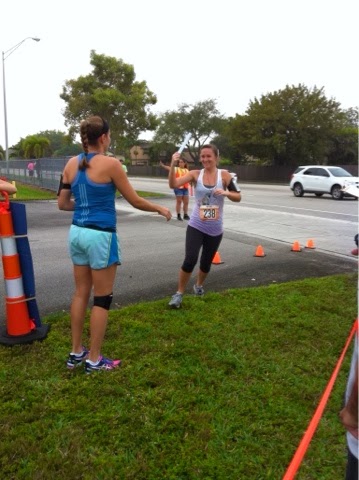 Our first van was up early to start us off with a start time of 5 am.  Everyone in that van ran their first leg and then we met them a few hours later at exchange 6.  I was the second one in our van to run.  I scrambled to get everything ready to run, but was worried I was forgetting something.  I know they say you just need running shoes, but I also need my knee brace, phone and carrier, running watch, headband, and music.  I was ready to run just as Amy ran in to meet me.  I got the slap bracelet in the exchange and I was off. 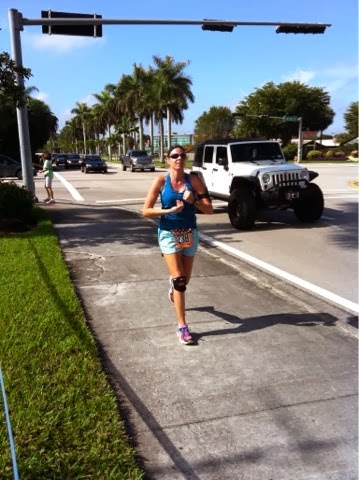 My leg was around eight miles through the streets and neighborhoods of Miami.  I felt like I was running a good pace, but stopping at quite a few stoplights to wait for traffic didn't help anything.  I was happy when I saw the One Mile To Go sign.  I ended up at a mall, but there was no time to shop.  Off to support our next runner!  Especially since the temperatures were getting up to 85 degrees.  That's February in Florida! 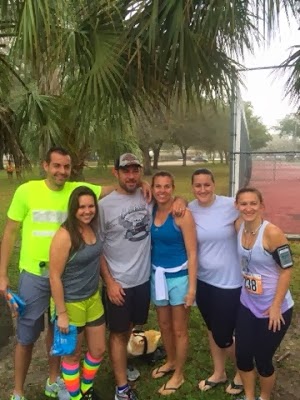 Here is a picture of our van.  Lots of teams wore costumes, but we kept it more simple.  Maybe next time! 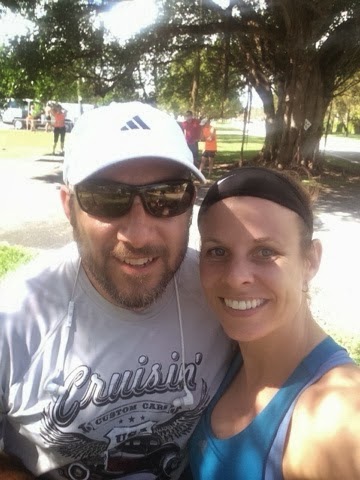 This was such a fun weekend for me and the hubby to spend together.  He's not normally a runner, but he will make an exception and train for Ragnar Relay.  They used to run a race that started in Clearwater, FL and ended across the state in Daytona Beach, FL.  That was our first Ragnar together, but they stopped that one when they started the Key West run. 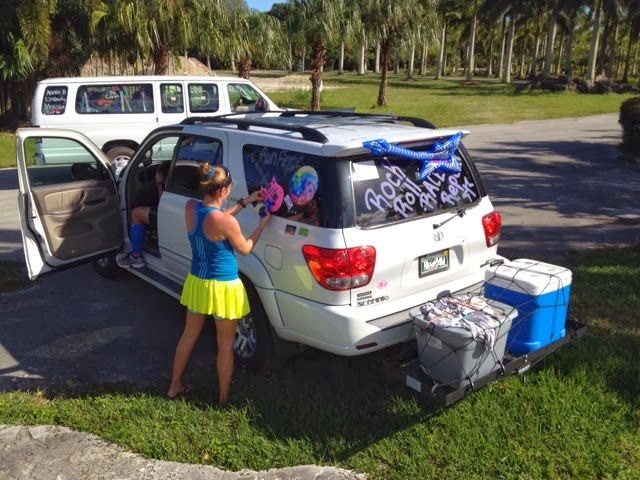 Most teams decorate their vans, even adding lights and painting their van with window chalk.  We went with a Rock and Roll theme.  Our van said "Rock, Roll, Race, Repeat" with the Ragnar symbol.  We had lots of inflatable guitars and microphones to add to our theme.  I actually still have the mini disco balls hanging from our rear view mirror.  When the night hit, we turned on our rotating light disco ball. 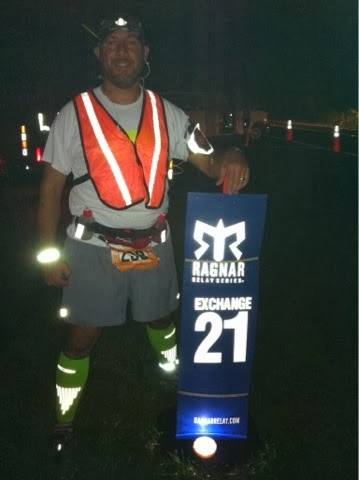 After unsuccessfully trying to get some sleep in a high school gym, it was night.  I ended up running at 2 am.  Of course my leg was the only one where there was a rain downpour!  This leg was around 6 miles and despite the rain, it was pretty nice.  We were somewhere in the Keys and I ran over a few small bridges and past some nice houses.  Of course the dark and rain made it hard to look around, but the weather was cooler and it was just a fun setting.  You can usually see the light of someone else bobbing ahead of you to help keep you on track. 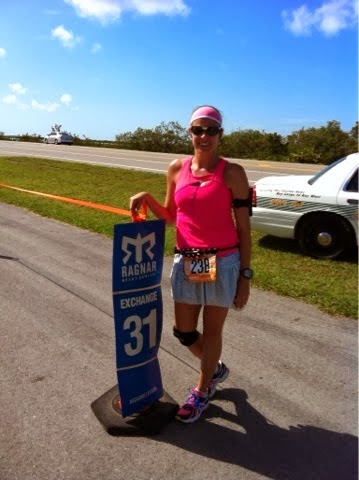 After our night runs, we grabbed some bagel sandwiches and again attempted to sleep in a high school gym.  Although others were able to get some rest, I only slept about 40 minutes total for the night.  I just don't sleep that well in unfamiliar places.  Just part of the experience though and I actually had more energy than you'd expect.  Although it was good that my last leg was my shortest.  It was again crazy hot out.  I decided to run my last leg in my disco ball skirt (tutorial to come)!  With less than two miles to go, I pretty much sprinted my last leg.  Beautiful views over the road bridges in the Keys.  So close now! 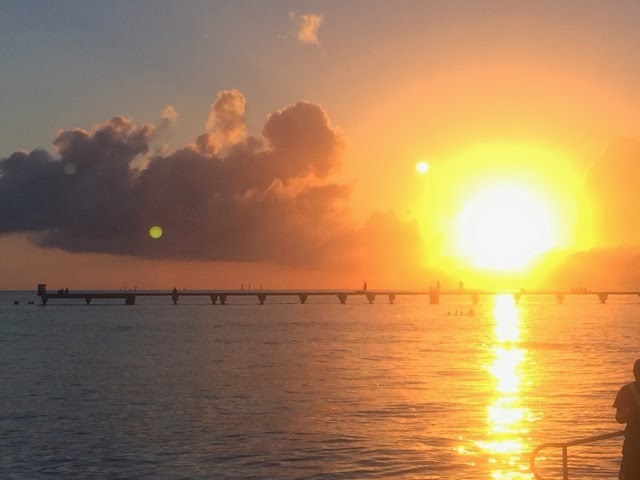 We finished our run in Key West just before sunset.  The view was amazing and the trip was a blur of memories.  It goes by faster than you think.  It's almost like you are constantly hurrying up to wait.  But the wait was over! 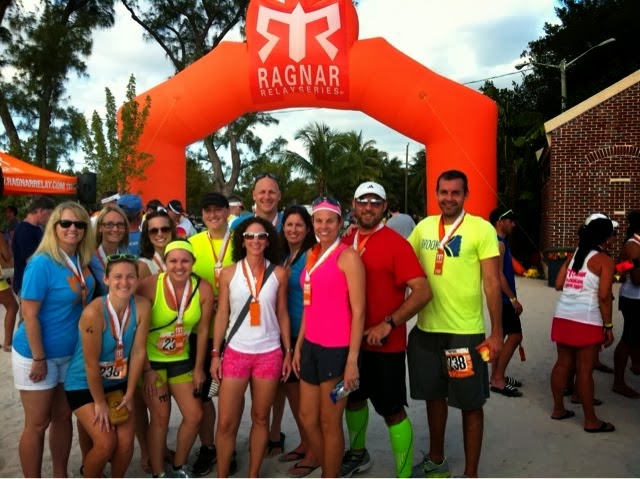 The whole team met up at the finish line to celebrate.  We got our free beer and a bite to eat.  We shopped for souvenirs and then headed back to the hotel for a much needed shower.  You'd think we'd be ready for bed, but we headed back to Duval Street for dinner and some drinks.  The streets were filled with other Ragnar Relay runners with the same idea. 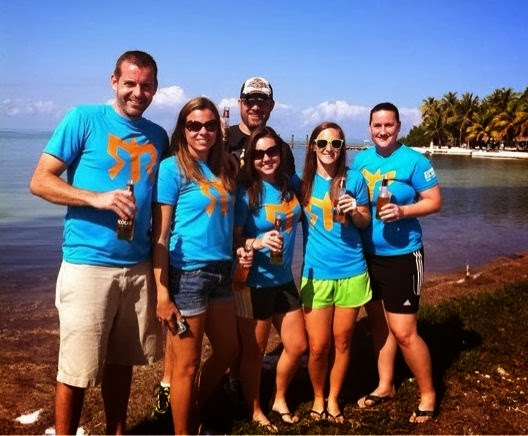 Even the ride home was an experience.  We ended up stuck on the side of the road for over two hours due to an accident on the bridge ahead.  Luckily we ended up stopped right in front of a convenience store!  Time for more pictures and making friends with more Ragnar runners. 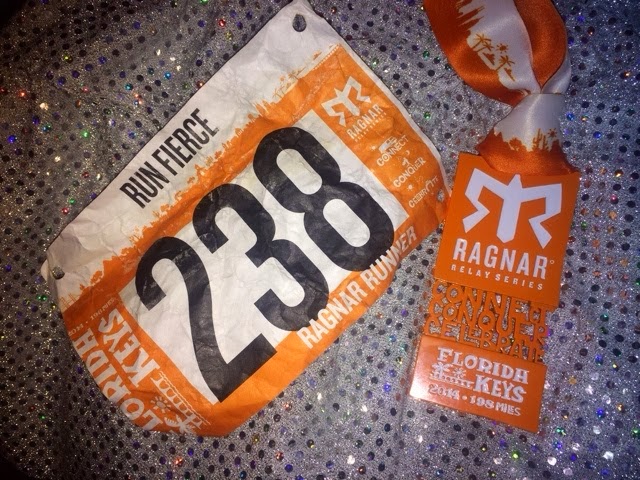 ﻿
This was my first time as captain of a Ragnar team and it was a lot of work.  It could be stressful getting people to commit, finding hotels where everything seemed to be sold out, collecting money and just organizing all the details.  Now I can say it was totally worth it.  Things came together and worked out and everyone had an awesome time.  The Ragnar finisher medal is pretty cool too, especially since it doubles as a bottle opener! 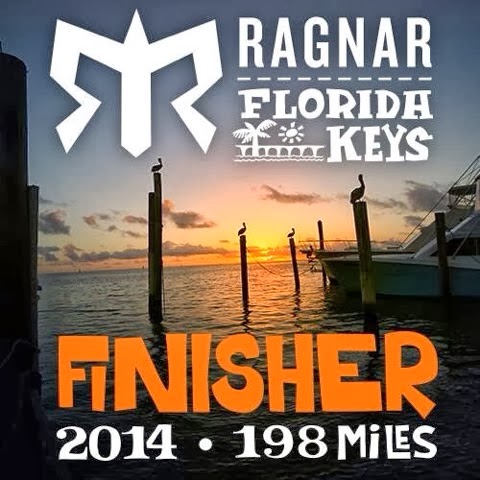 ﻿
Ragnar Relay isn't just a fun race, it's also an amazing community.  Everyone is so great at cheering each other on and keeping each other motivated.  I've had teams stop and give me water while I was running and seen teams helping each other out.  It's not all about winning at the end, but everyone having a great time on the way there.  It was such a great time.  I can't wait to start planning my next Ragnar Relay!

Posted by Melissa @ LoveBugLiving at 6:00 AM